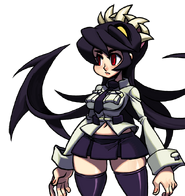 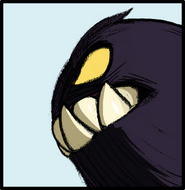 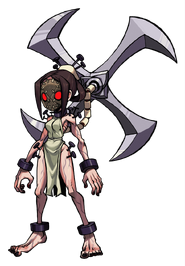 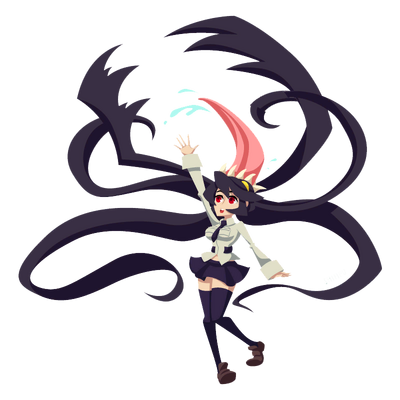 Filia: Hey Samson, I've been doing a lot of thinking.
Samson: Yeah? This oughta be good.
Filia: When we meet the Skullheart… what if we wished for unlimited hats?
Samson: Hahahaha. What? … Why? What the hell do you think we need unlimited hats for?
Filia: Well… since you eat 'em almost every time we run into someone new! It's getting super-duper expensive…

Filia: We brought like seven yesterday alone!
Samson: That's only because bowler hats are the best, kid! Even better than fedoras! It's not my fault they're super nummy. You should just buy terrible hats, like fezes.
Filia: But… but fezes are cool!

Samson: Sure they are. What would you call this ability, anyway? "Unlimited Hat Works?" Just stick to fightin', kid.

This exchange began as a joke during development and was written by Brady Hartel, the Lab Zero Games UI Designer. While he was working on the dialogue frame used in Story Modes, we wrote this script as a gag and sent it off along with variations and color tests of the dialogue frame to Alex Ahad and Mike Z to be approved.[1]

The original behind the scenes version of Unlimited Hat Works is different to the final version that made it into the game, in that it used several backgrounds instead of taking place exclusively on Maplecrest and had slightly different formatting (such as using italics and red colored font for some words). These changes occurred most likely because the script was written as apart of the dialogue frame tests, experimenting its appearance like how the text contrasted against different backgrounds and font styles. The tweaks made in the setting and formatting where probably done to match the standard of the other cinematics used in the final game.
The old version also didn't use Samson's portrait while he was speaking, most likely because either the art hadn't been completed yet or that the cinematic was implemented quickly due to it only being intended as a joke/test.

While this script was in the game data files, in wasn't accessible to be viewed in-game until the Art Gallery's release on November 1st, 2013. It is unlocked for use in the Art Gallery after beating Filia's Story Mode under the title ‘Filia - Joke - Unlimited Hat Works [English Only]’. As the title suggests the script is only viewable in English and is the only cinematic in the game to not have multi-language text options.

Retrieved from "https://skullgirls.fandom.com/wiki/Unlimited_Hat_Works/Script?oldid=30384"
Community content is available under CC-BY-SA unless otherwise noted.