What's new in the World of Skullgirls?

Canopy Kingdom News
About the game
Skullgirls is a fast-paced, 2D fighting game developed by Lab Zero Games (formerly known as Reverge Labs) and lead by tournament champ Mike “Mike Z” Zaimont and artist Alex “o_8” Ahad. The game first released in North America through a digital download format on April 10, 2012 on the PlayStation Network. It was released a day later on the Xbox Live Arcade on April 11, 2012. A PC version of the game was released via Steam on August 22, 2013, with all purchases coming with a frequently updated beta version known as the Skullgirls ∞Endless Beta∞.
Drawing on the best features the genre has to offer, Skullgirls is designed to be a tournament-grade fighter while remaining approachable and engaging for the casual player.

Want your community included? See how! 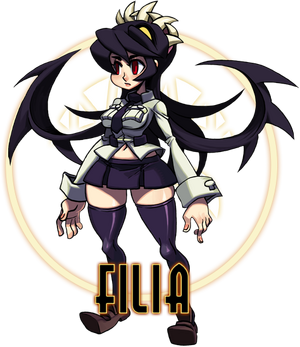 Filia (JP: フィリア) was once just an average schoolgirl, but one day woke up without any memories and a second mouth on the back of her head. She was now playing host to a parasite named Samson, an unruly mop of demonic hair with incredible power.

With no memories or anyone to turn to for help, if she ever hopes to piece together her forgotten past and survive the inevitable clash with the Skullgirl, Filia will need to trust this mysterious being.