Taito Type X²
Skullgirls 2nd Encore is an enhanced version of Skullgirls Encore which was released exclusively for PlayStation 4 and PlayStation Vita on July 7th, 2015. It is also released on April 13th, 2016 as a DLC upgrade to the original Skullgirls on Steam.[1] The game was not released on the Nintendo 3DS, Wii U or the Xbox One due to a Nintendo platform port lacking a publisher[2] and because of Microsoft's parity policy at the time.[3] However, at the Anime Expo 2018, it was revealed that the game would be coming to Nintendo Switch.[4][5] It was released on October 22nd, 2019 by Skybound Games. An Xbox One port was announced the same time as the Switch port. Originally, the port was "postponed indefinitely",[6] but after announcing additional DLC for the game, the developers have considered porting 2nd Encore to both Xbox One and Xbox Series X/S, and is now being targeted to be released around 2022.[7]

Skullgirls 2nd Encore includes all of the DLC characters and stages funded by Lab Zero Games' Indiegogo campaign from the get-go, as well as “All Play” multiplayer lobbies and an extensive art gallery. The PS Vita version is playable on a PlayStation TV, and supports up to two local players with DualShock 3 or 4 controllers, as well as any PlayStation 3 compatible fight sticks. Online is Cross-Play across the entire PlayStation family, letting you fight opponents who own either the PS3, PS4 or PS Vita version. The game also supports Cross-Buy, meaning purchasing the PS4 version of the game will grant you the PS Vita version for free and vice-versa.[8]

Hints towards 2nd Encore began when a PS4 and PS Vita port of Skullgirls Encore was revealed to be in process on July 10, 2014, having been slated to arrive alongside the Robo-Fortune and Lobbies patch update coming to the current platforms.[9]

Due to a controversy regarding of Mike Zaimont’s inappropriate behavior cause all staff members (including Alex Ahad) left Lab Zero Games, Autumn Games and Hidden Variable (the developer of Skullgirls Mobile) take over both Lab Zero Games’ developed and future games, and also owning their games’ IPs.[10]

With Hidden Variable taking over Lab Zero's former game works, Skullgirls 2nd Encore return to its DLC release routes in 2021, starting from Annie[11][12]. Season DLC Pass is also announced on February 21, 2021 however, it is unknown on how many Passes will be.[13]

On March 3rd, 2021, a Steam announcement made by Hidden Variable Studios confirmed that Future Club will be working with them on the development of Annie along with other characters in the first Season Pass.[14]

This version of the game includes new exclusive modes and features not present in earlier renditions of the game: 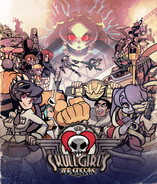