Parasites are entities in Skullgirls, defined as creatures that bond to a person's body, providing augments to their "host". Despite the name, they appear to form a symbiotic relationship with their host, drawing nutrients from their bodies in exchange for giving their hosts supernatural abilities. Some Parasites can operate independently of their host's body; these are classified as "Remote Parasites". A remote parasite needs a part of the host body in order to be bound to the host, for example, Taliesin's hands, Annie's eye, or Eliza's blood.

In the past, they were known as Theons and their hosts as "avatars", until Eliza, then known as Neferu, and Sekhmet caused the world to fear such beings, leading to the negative stigma and discrimination that many of them and their hosts face in the present.

Parasites take on a variety of forms, but can be classified as one of two groups: "regular" Parasites, sentient beings that appeared naturally (and appear to predate the Skull Heart itself) and "Synthetic" Parasites, being mechanical, man-made parasites mainly functioning as weapons for the Anti-Skullgirl labs. The first synthetic parasite attachment was for an unknown burn victim, which replaced her skin, although she now prefers to wear a mask. Synthetic Parasites are non-sentient.

Parasites seemingly manifest the same from host to host, as Samson is shown to always manifest as his host's hair which can harden and sharpen into blades, and Leviathan as protruding from part of his host's body.

Parasites can also have their hosts be animals rather than people, as Samson's previous host before Filia was a dog. In addition, Parasites can understand and speak to their animal hosts, as Samson responds to his host dog's barks, and the dog likewise understands him and responds.

Parasites can greatly vary in age, some are ancient while others are relatively new. New ones can be created. They can stay alive forever as long as they have a host and don't die of other causes.

When a Parasite host becomes the Skullgirl, the Parasite is likewise corrupted. They could lose their individuality as well. This process also depends on the wish of the host as well.

Creative director, Alex Ahad, stated that all the Parasites and Living Weapons have a related, unrevealed, origin. It is confirmed that the mysterious element Theonite is the source of both their powers.

Soul Contamination is a mental corruption that occurs in people possessing multiple (synthetic or natural) parasites. It could potentially kill the person and is very dangerous. In Peacock's story mode Hive notes that it must have taken great difficulty for both of her parasites to be implemented without causing soul contamination. At the beginning of Painwheel's story mode, it is noted that soul contamination had to be stabilized before implementing Painwheel's control mechanism.

Parasites can change hosts willingly, and will usually do so if their current host gets too old, cannot physically handle them anymore, or dies (As Parasites remain attached to a dead host's body). The act of changing hosts would kill the former one, however, in Fillia's Skullgirl Mobile's origin story, Samson states that Parasites take the process of changing hosts seriously, and won't leave their hosts unless it is a matter of life and death. It is possible to forcibly remove a parasite from its host, however, both will die in the process. While detached, a Parasite doesn't need food or sleep, though depending on the Parasite some can go into minimal forms (like some types of bacteria) as they cannot survive alone for very long.

Alex Ahad has stated that some artificial Parasites can be removed, depending on how they are attached to the body. 'The point of attachment can’t be removed without massive surgeries, but unlike normal parasites, artificial parasites can have removable parts.

Note: Some of the below Parasites may be synthetic, but will be considered natural until official information states otherwise. 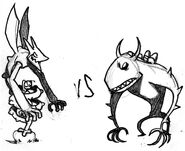 Avery, one of Peacock's parasites