Living Weapons are a concept in Skullgirls. They are self-aware legendary weapons forged by master weaponsmiths. Like Parasites, they come from the mysterious element Theonite, although they have comparatively limited sentience (if any at all). They can only be wielded by certain gifted individuals.

Vice-Versa while removed from Cerebella's head

Concept art of Parasoul and Umbrella wielding their living weapons

Concept art of King Franz and his living weapon, Todd 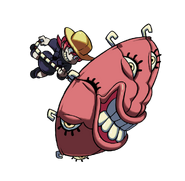 Double transformed into Umbrella, wielding Hungern as a weapon 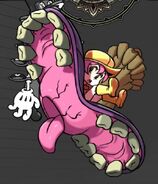 Double transformed into Umbrella, wielding Hungern as a weapon

D. Violet holding her Living Weapon, the Pazuzu Whip
Add a photo to this gallery
Retrieved from "https://skullgirls.fandom.com/wiki/Living_Weapon?oldid=38403"
Community content is available under CC-BY-SA unless otherwise noted.