Lab 8 is a stage in Skullgirls. One of several anti-Skullgirl labs created to aid in the destruction of the Skullgirl, Lab 8 is responsible for the creation of Peacock and Big Band's implants.

Lab 8 has two similar stage variants; 'Lab 8' and 'Lab 8 (Empty)'. Both stages can be unlocked for use in multiplayer and training by completing Peacock's story mode. Alternatively, owning the Color Palette Bundle DLC will instantly unlock Lab 8.

Anti-Skullgirl Lab 8 is home to a wealth of agents looking to end the Skullgirl's rampage through the Canopy Kingdom, many of them heavily modified with advanced technologies or parasites. Computer terminals, heavy machinery, and mad science are mainstays within the confines of Lab 8's uninviting interior. Several agents can be seen looking over the unfolding fight, such as Dr. Avian, Big Band, Hive, Leduc and Ileum. Stanley can be seen further in the background, having a heated discussion with a colleague.

In Lab 8 (Empty), the lab has been devastated by a swift and calculated attack, leaving several scientists dead and much of the background equipment damaged. The major residents of Lab 8 that normally appear in the background are absent.

Lab 8 in the ending of Beowulf's Story Mode 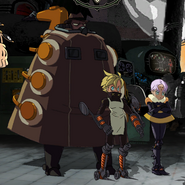 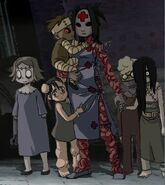 Ileum and the Anti-Skullgirls children

The corpses of Andy Anvil and Stanley in the background of the empty Lab 8 stage, which were created as a result of miscommunication