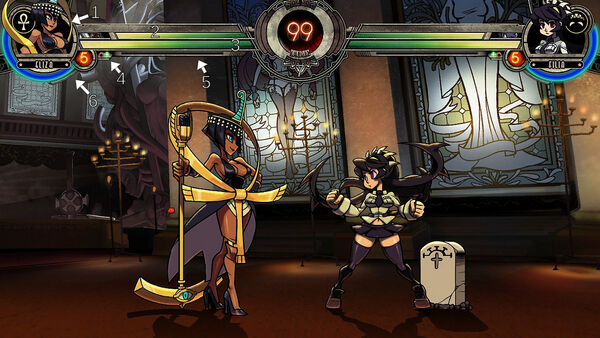 The character currently in play is displayed here.

If playing with a team of 2 or 3 characters, characters not in play will have a small portrait and current health displayed in this area.

Displays the health for the character currently in play. When the character's health is zero, that character is knocked out. Full health is indicated by a green coloration; turning light blue after receiving any amount of damage. Early versions of the game had the health bar colored red regardless of damage taken.

In a team, when taking damage, a character will receive health that can be recovered when switched out with another character.

Indicates when a Partner character is available for Assist actions (like attacks and tag ins). When the green light is lit you can preform any 1 Assist action, if the red light is lit then you will be unable to do any. (Applies only to teams of 2 or 3)

When hit in a long combo, a meter above the health bar will build up. When full, a burst will occur. It will drop to zero when a combo ends.

This gauge shall fill as you attack and defend (and also through whiffing attacks, however you can't retreat and whiff and this effect stops once you have at least 1 bar full). By spending stocks of the Dramatic Tension Meter you will be able to unleash various techniques including Blockbuster attacks, Delayed Hyper Combos, Snap Backs, and more.

The number displayed next to your point character's portrait tells you how many full stocks you currently have. Each level has its own color: Black = Empty, Green = 1, Blue = 2, Purple = 3, Pink = 4, Rainbow (rapidly changes color) = 5.

Signals how much time is left in the match, when it reaches 0 the fight is over and the player with the most combined health wins.

Round Counter - Usually appears in fights that consists of one character on both teams, much like most other fighting games. If the character's icon present in one of the circles, that means that character has won a round.

Hit Counter - Commonly appears when a combo appears. It shows how many hits a player accumulates during the combo.