Glass Canopy is a stage in Skullgirls Encore. Set in a massive regal atrium, this stage was first teased as a background image in Parasoul's story mode.

True to its name, a giant parasol-shaped canopy of glass allows the night sky to be seen from the crowded ballroom below, where scores of the Canopy Kingdom's elite mingle. Parasoul can be seen looking onwards in royal attire while Adam and Umbrella enjoy a dance together. Further in the background, a tuxedo'd Panzerfaust entertains a small crowd of curious spectators. A small tank, likely his arm tank, can be seen serving drinks in the background.

Glass Canopy is one of only two stages that take place outside of New Meridian. Unlike Class Notes however, the actual location of this stage is known - Canopolis.

The fully animated NPCs that appear in the background are submitted by Skullgirls Indigogo backers who donated at least $1,000 USD to the campaign. They appear in five different sets and the set chosen is rotated every time the stage is selected. The NPCs on stage also always remain in the same place. All NPCs are original non-Skullgirls related characters.

The following displays a list detailing the various NPC's, being ordered by the set number from left to right of the stage:

An early version of Glass Canopy, with a more accurate color scheme

Alex Ahad's original concept for the stage, with a statue of the Renoirs at it's center.

The stage during gameplay

Guest who has fallen into the fountain

NPC concepts for the stage. The dress Umbrella wears in the actual stage was concepted by Audrey Kare.

NPC concepts for the stage

NPC concepts for the stage 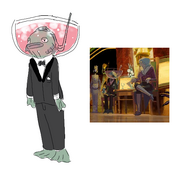 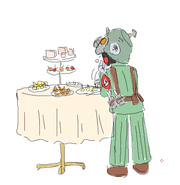