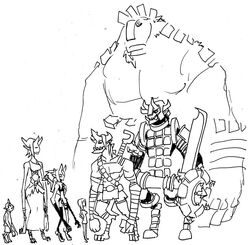 Gigans are a species of creatures that hail from the Gigan Nation. They are infamously savage and war-hungry, previously being one of the countries involved in the Grand War against Canopy and the Chess Kingdom. Despite this, not all of them share a thirst for blood, and some are even seen living peacefully in the Canopy Kingdom.

The Gigans' main physical attribute is their horns, which come in different shapes and amounts. While Gigans are known to grow into giants, they actually vary in size, some being the height of a human person. The average height of a Gigan is 15 feet.

Filia and a Gigan 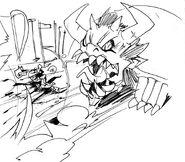 Gigan warriors about to fight a group of Canopy super-soldiers

Patty encounters a Gigan in No Man's Land

Easter and Patty going against a group of Gigan's
Русский
Community content is available under CC-BY-SA unless otherwise noted.
Advertisement