Filia with Carol and Mrs. Victoria

Filia dressed as Momohime from Muramasa 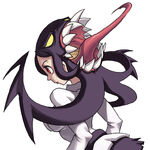 Filia with Parasoul and Peacock

Filia with Parasoul and Squigly

Filia with Parasoul and Squigly (coloured)

Guide detailing how to draw various proportions of Filia's body 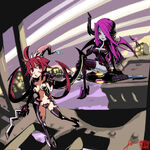 Filia and Parasoul dressed up as Witchblade characters

Nadia and Filia together.

A smug Filia belittles Samson on their first meeting

Filia asking her dad if Dog, Samson's host, could stay with them

An unconscious Filia becomes Samson's new host, granting her enhanced healing after Ottomo beat her to near death

Filia drinking a milkshake before being interrupted by Riccardo

Samson attacking Riccardo after he continues to hit on Filia

Filia with Painwheel at her Story Mode ending

Filia and Carol before the events of Skullgirls

Filia before she received Samson

Filia thinking of Carol before making her own wish

The slow and painful transformation to becoming the next Skullgirl

Filia as she appears at Squigly's Story Mode ending

Filia as she appears at Fukua's Story Mode ending

One of Filia's three win poses (activates randomly, or hold HP to choose it)

One of Filia's three win poses (activates randomly, or hold MP to choose it) (animated)

One of Filia's three win poses (activates randomly, or hold LP to choose it)

Smear frame of Filia during her Fenrir Drive Blockbuster

Smear frame of Filia during her Fenrir Drive Blockbuster

Filia crawling out of a TV dropped by Peacock's Shadow of Impending Doom, referencing the Horror movie 'The Ring' 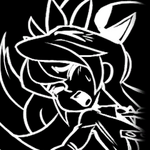 Filia laying on her back

Retrieved from "https://skullgirls.fandom.com/wiki/Filia/Gallery?oldid=37967"
Community content is available under CC-BY-SA unless otherwise noted.