Michelle Ruff (English)
Chie Matsuura (Japanese)
Eliza (JP: イライザ Iraiza) is the celebrity diva of New Meridian’s premiere nightclub, Bastet’s Den. She is the mistress of Albus and Horace, and has been host to the skeletal Parasite Sekhmet for untold years.

Eliza is a playable character in Skullgirls Encore. Eliza was the nineteenth possible DLC character for Skullgirls to be revealed in the Indiegogo campaign, at $380,000. Having won the first DLC character vote, she was the third character to be created (after Squigly and Big Band). Her homestage is Bath of Tefnut, however Gehenna also plays an important role in her Story Mode.

She was originally set to be the main antagonist in the Skullgirls sequel.[3]

There are other club singers in Canopy Kingdom, but Eliza is one of the best known.

She is confirmed to be older than Annie, and has been operating under her current guise for the past twenty years.

Eliza is a diva who loves to be the center of attention. Despite running a charity blood drive, she has a greedy side in which she wants to keep the blood all to herself to retain her beauty. Although she prefers to sing on the stage over searching for the Skullgirl, she starts to enjoy the challenge of the hunt when something catches her eye along the way. She is shown to be ruthless to those who oppose her. For example, she killed Cerebella after she refused to back down upon realizing Eliza's true intentions. Eliza and Sekhmet spend many years with one another to the point where their personalities merged and they act as one being.

Eliza also has a god complex that is supported by her dislike of Trinitism and wanting to be the ruler of the world. Because of the chaos and misdeeds she has done in the past, she was hated by Samson, Leviathan, and Double. While malicious, she is shown to dislike the prejudice against parasites due to being bound to her own skeletal parasite, Sekhmet. Her adamance of wanting Samson and Leviathan to share her ideal of Theons taking power once more also suggests she considers this prejudice unjust, deeming them deserving of a higher social order. When fighting as Sekhmet, she is very aggressive, sadistic, and feral. Despite those qualities, she does not exhibit any type of abuse towards her servants Albus and Horace.

Eliza is fond of cats. This is likely a reference to how the Ancient Egyptians idolized cats in respect to Bastet, the cat goddess of protection.

Eliza is a popular singer in New Meridian and is predominately known for her amazing charity work, which are namely, blood drives. Under her lavish appearance, Eliza harbors a dark secret, she carries the Parasite Sekhmet and uses the blood she gains in the drives to make herself young and beautiful perpetually. It did not take long for the Medici Mafia to discover this secret and use it to their advantage and blackmail Eliza. Now she finds herself pitted amongst the other girls in an ancient advent that Samson and Leviathan know all too well.

Eliza is supposedly an alias and is short for Elizabeth, which means "My God is an oath" or "My God is abundance". She was named after (and influenced by) two people:

Neferu, which means "beauty", was the name of several Egyptian queens. Given that it appears in hieroglyphs in her Action Shot poster, this is possibly her true name.

EDIT- Nefer or "nfr" actually means "Harmony" in "Sufi", the spoken language of the hieroglyphs. The "u" on the end makes it plural. - Dr. Abd'el Hakim Awyan, indigenous Khemetian wisdom keeper.

The ribbon wrapped around Eliza's body forms the shape of an Ankh, an Egyptian symbol commonly associated with "eternal life".

After a performance at the night club, Bastet's Den, Eliza is summoned to meet with Lorenzo and Vitale Medici. They threaten to expose her secret (stealing from her own charity blood drive) if she does not retrieve the Skull Heart for them. Cerebella, eager to please Vitale, is sent along to keep an eye on her, but is constantly at odds with Eliza and her servants, Albus and Horace.

Following the scent of death, Eliza finds Squigly, who has just escaped after a fight with Parasoul. Revealing Sekhmet hidden inside herself, Leviathan recognizes the singer who his host admires so much as a being once known as "Neferu" and "The Crimson Scourge". Eliza attempts to persuade Leviathan into joining her in taking his rightful place as a Theon, but he refuses and a fight ensues. Thoroughly beaten, Squigly and Leviathan retreat.

A new scent of unusual blood leads Eliza to Little Innsmouth and subsequently Ms. Fortune. Realizing that the feline feral contains the Life Gem within her, Eliza captures her, intending to keep the artifact and her "cute little drinking fountain" to herself. Cerebella fights her for this betrayal, only to lose and be killed as Eliza ponders that the world has forgotten the terror she once wrought.

Deciding to claim the Skull Heart, she makes her way to the Grand Cathedral, again following the scent of blood, where she runs into Filia. As with his rival, Eliza tries to persuade Samson into joining her and finding himself a worthy host, but he rejects her offer as he considers her one of the causes of Delilah's death. Eliza proceeds to crush them before descending into the catacombs, only to be puzzled by the lack of blood. Marie, learning that she had worked for the Medicis, however briefly, sees this as enough reason to kill her and her servants.

After defeating Marie, Eliza prepares to claim the Skull Heart, but the mysterious artifact addresses her on its own, claiming that it's finally found her. Just then, Eliza's arm is severed by an infuriated Double, who accuses Eliza of murdering "her" children; Aeon and Venus. As Horace and Albus move to defend their mistress, a bleeding Eliza calls Double "Queen Lamia" before sensing something underground. Seeing an opportunity, she tears open the ground and flees to Gehenna, absorbing the ample amounts of blood there. By the time Double arrives, Eliza is more powerful than ever, allowing her to defeat the shapeshifting creature with ease. Having absorbed all of Gehenna's blood, Eliza destroys the Skull Heart, saying "it could have some use to me but now it doesn't matter", and takes her leave. She also states that her issues with the Trinity were some "ancient rivalries" which she thinks "do not matter now".

With the Heart gone and Ms. Fortune in their possession, Eliza, Albus, and Horace return to the Bath of Tefnut to relax and plan for the future. As Eliza begins plotting how to prepare for the Medicis (who she expects will come for her once they realize her betrayal), she is interrupted by the team of Squigly and Filia, their parasites determined to destroy the Crimson Scourge before she can cause any more damage. Irritated but unimpressed, Eliza transforms her chamber into the Bath of Sekhmet before battling and defeating the duo.

With Squigly falling back into death with the loss of the Skull Heart, Eliza has Albus lock up the undead singer and her Parasite back in the catacomb to use as "a crude alarm": Squigly will reawaken when the Skull Heart resurfaces. Eliza then binds Filia and Samson in a blood sarcophagus, planning to kill the former once she has found a more "suitable" host for her fellow Parasite. After this, Eliza decides that her previous "games" have been too small-scale, telling Horace that she'll be going out on her own, she merges with all of the blood she has collected over her life to create a giant figure resembling a lion. Declaring her intent to remind the world who its true leader is, Eliza sets off to destroy the Medicis.

After the credits, Eliza is shown approaching Medici Tower, only to be intercepted by a giant construct made of statue pieces and glowing-blue tendrils. From within the new giant's head, Marie grimly tells Eliza that "this is not over".

Eliza's main focus of her fighting style is her blood. She uses the malleability of the blood to turn various body parts into different creatures based off of Egyptian mythology. She also uses her microphone weapon, the Staff of Ra, to deliver damage. Her two bodyguards, Albus and Horace, are eager to assist her in battle by divekicking, throwing her opponents around, and ramming them with lounging chairs. She can also perform a taunt that restores lost health and allows Sekhmet to perform Lady of Slaughter by herself.

Sekhmet is another important element of Eliza. When Eliza is anchored to the Staff of Ra, Sekhmet comes into battle. Whereas Eliza is powerful, but lacking in mobility, Sekhmet is a fast creature that has weaker attacks. Her move list is different to Eliza's and she attacks by performing lunges, inflicting fast slashes using blood-fashioned cutlery and by causing the formation of various blood-made symbols. She also has hyper armor that prevents her from flinching. However, she will transform back into Eliza if her meter (which depletes while in play) runs out or she has been grabbed by the opponent. Although she is capable of performing attacks even when her opponents attack her, she can be stunned for a bit depending on a number of hits she endures. That can put her in peril when her health is low. She also cannot perform a Blockbuster in that state unless Eliza performs a taunt.

She was originally to have the ability to shed blood when attacked, which she would then be able to use in her own attacks or reabsorb to gain health.[4] However, this idea was discarded as it was considered too difficult to implement, especially as she was developing into almost two completely separate characters instead of one. However, in the update that introduced Annie, this ability returned with a few key differences. When Sekhmet is in play, she no longer drains meter, but instead she drains her own health. Every time Sekhmet attacks her opponent, drops of blood spill out. Whenever Eliza comes in contact with the blood, she regains health. If Eliza preforms her taunt, any blood on the field will come to Eliza. 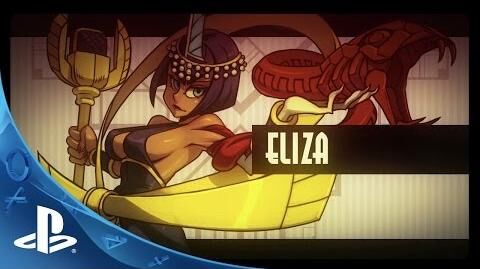