The Dog is a character that appeared in Filia's origin story, "Hostile Makeover', in Skullgirls Mobile. He was a previous host of Samson's as well as Filia's pet dog.

Dog was a stray dog who had been Samson's host for an undetermined period of time before meeting Carol and Filia. Samson convinced Filia to adopt Dog in exchange for protecting her. Filia brings them home without telling her parents about Samson. A year later, after Filia's parents cut ties with the rest of the Medici, Marie appears at their home in Maplecrest to kill them. Dog helps fight her to protect the family, and Marie suddenly becomes distressed, seemingly recognizing Samson and/or the dog. She grants mercy on them so long as they leave the city.

Later that day, Vitale and Ottomo visit. Assuming they were spared by the Skullgirl because they had betrayed the Medici, Vitale shoots Marcus and Amelia while Ottomo tries to kill Filia. Dog attempts to defend her, but is killed by Ottomo in the fight. Samson detaches from him shortly after to take Filia as a host when he realizes she's still alive.

Dog appeared to be friendly towards most people. However, he was also protective of those he cared about, willing to fight Marie and Ottomo when they attacked Filia and her parents. While he couldn't speak, according to Samson he expressed concern for Filia when Samson suggested leaving the family.

Exposing Samson on the back of his neck 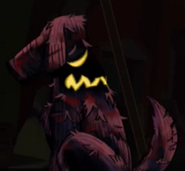