The Main Cast of Skullgirls consists of the original eight characters that are available from the start of the game. DLC characters, despite being playable, do not contribute to the main cast.

When Skullgirls was in pre-production, it was intended for Umbrella and Squigly to be part of the main cast. However, they were scrapped and replaced with Valentine and Double in order to have more playable villains. Squigly and Umbrella later became DLC characters instead. 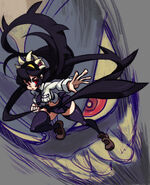 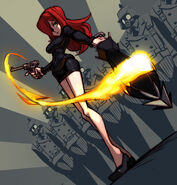