Skullgirls Wiki
Register
Don't have an account?
Sign In
Advertisement
in: Characters, Characters with Parasites, Female,
and 5 more
English

Erica Mendez
Annie (JP: アニー also called Annie of the Stars) and her adventures have made for popular figures in nationwide folktales, and a children's television adaptation of Annie and Sagan's adventures was inevitable. The show's success lies in its pair of live action hosts, who are as convincing as their cartoon counterparts. But if the public learned about the real Annie, it might surprise them...

Annie is a playable character in Skullgirls 2nd Encore. She was the sixth possible DLC character to be revealed in the Indiegogo campaign, at $120,000. While she failed to win the character voting (losing out to Eliza and Beowulf), she was announced for Skullgirls Mobile several years later on August 14th, 2020[3] and Skullgirls 2nd Encore on January 31st, 2021[4] after having been teased in February 10th, 2020[5]. She was released for early access on Steam on March 4th, 2021, and will be fully released on Steam and PlayStation on July 8th, 2021.[6] Her home stage is Sound Stage 15.

Both Annie and her Parasite originally appeared in Alex Ahad's designs for a shirt for University of California, Los Angeles's Japanese Animation Club. Sagan was originally named "Stan", although this was changed due to similarities to Sam & Max.[7]

Her mother's wish not only made her forever young, but made her incapable of swearing.

Her mother was a previous Skullgirl who wished Annie to be a child forever. Annie now stars in the Anti-Skullgirls children's show and is much older than she appears. She hides her obvious immortality by changing her hairstyle, so nobody seems to notice and simply regard her as being an actress. Her show, Annie of the Stars, is based on the life of Annie herself many generations ago.

Annie has fought the two previous Skullgirls (Queen Nancy and Selene Contiello) and maybe a few more before. Throughout the years she has used different weapons and abilities.

Both Peacock and Parasoul are fans of her show.

Annie and Sagan have similar names to Carl Sagan and Ann Druyan, a real life cosmologist couple. Sagan was directly named after the former. Her Story Mode revealed, through Double, that her complete name is Annabella.

Annie is meant to be an archetypical magical girl and seems to mainly take inspiration from Sailor Moon having a cosmic themed look and abilities. She has sea green hair in braids, a darker sea green dress with matching shoes and stars on her eyepatch, clothes and the soles of her shoes. She has a reddish magenta bag around her waist. Her eyes are yellow and one of them is placed in the mouth of Sagan who resembles a rabbit doll with sharp teeth. Annie often drags or carries Sagan like a doll when he is not moving on his own. She carries a sword where a part near the handle is the same color as her bag and has a star on it.

In her super form, seen in Robo-Fortune's ending and concept art for her moves (where it is called "temporary season 2 power'd up mode!"), Annie is seen fused in some way with Sagan. Her hair is loose and she wears a yellow glowing crown with three stars floating around it. Both of her eyes are now in her head. The star on her outfit is now glowing and what seems to be Sagan's arms are wrapped around her neck while his ears are spread out like wings aiming above her shoulders. She gains a sparkly dress, dark or colored stockings with stars on them and different types of shoes. She gains an hourglass body similar to one of the trinity goddesses Aeon. Within the concept art she gains what looks like Saturn-like rings around her body but in Robo-Fortune's ending it might be cosmic sparkling energy in the form of a vortex.

Annie's Story Mode starts with her at the studio talking with Florence, who warns her that the ratings for her show are dropping. Annie doesn't care about that however, as she's more focused on taking down the current iteration of the Skullgirl. Florence promises that she will handle the skullgirl soon but first they should at least focus on what's happening at the moment, including finishing shooting the episode they're making. Florence then reveals Robo Fortune, (Who was found damaged in the field with the prop department fixing her up so she could fight for the mid-season finale). After defeating Robo Fortune, Annie was about to leave but was stopped by Florence who revealed the winner of 'Annie of the Star' essay contest, Aileen.

Florence explained to an annoyed Annie that since Aileen won the contest, she gets to spend the day with Annie (and reminding Annie that it's her own fault for putting 'something' on hold. Annie ultimately agrees to it, but does it via going around the city of New Meridian in an attempt to find the new skullgirl.

Beowulf's Story Mode reveals that he and Annie have had a mutual friendship during their acting career, where he guest stars as "Big Bad Wolf" in her show. During Skullgirl incidents, Annie tries to warn him about a suspicious event that he has participated in, and not to approach the Skullgirl, to no avail. Beowulf, confused by Annie's youthful appearance despite it having been years since they had worked together, assumes that Annie is a different actress than the one he knew. She later reappears and rescues him and most of Double's captured victims in the Gehenna, a few of which were the opponents that he had previously encountered. Without any other options, Annie allows him to face Marie while Annie takes care of Double. After Marie and Double are defeated, he realizes the truth of his fixed match with Grendel and of Annie's identity as the same one he used to work with. Annie then decides to cancel her current TV show and start a new one; a new crime-fighting dynamic duo TV show co-starring Beowulf, now as a protagonist.

Annie is a seasoned fighter who has been around for a long time, acquiring many skills and powers along the way. Her sword is forged from a meteorite and can channel the power of the stars in its sweeping cleaves. Her right eye bonds her to her Remote Parasite and partner, Sagan, who grants her powers of a galactic motif. While some of her abilities carry more of a sparkly magical girl motif, Annie tries to execute them with the same sternness. 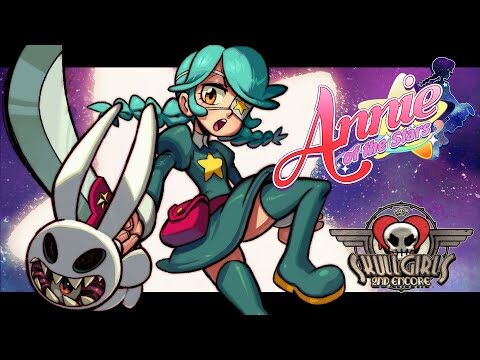